Home Gaming Athlane looks to connect brands and esports streamers with a fresh $3.3... 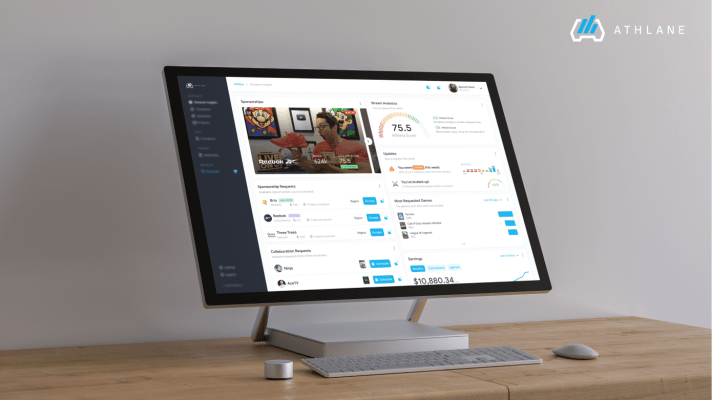 The startup originally positioned itself as the ‘NCAA of esports’ but, after some time in stealth, has taken a new approach. Athlane is looking to be the connective fiber between streamers and brands, facilitating sponsorship and endorsement deals with more transparent data and analytics and a streamlined communications flow.

Athlane has products for both brands and streamers.

Brands can use the Athlane Terminal to manage their sponsorships. The Insights Hub uses proprietary data to help brands understand which streamers are followed by their target demographic, and whether or not the products will resonate with that fanbase. Insights also allow brands to see when a streamer’s viewership is growing.

On the streamer side, the company has built out a platform called Athlane Pro, which lets streamers manage each task from their sponsors individually. Streamers can also use Athlane Pro to counter-offer inbound sponsorship deals or negotiate terms.

Streamers can also use Athlane’s machine learning algorithm to get clearer insights on their stream performance, such as whether their YouTube viewership overlaps with their Twitch viewership, or see which videos do better based on title or thumbnail. But more importantly, the Athlane Content Hub gives streamers the opportunity to understand if their fanbase specifically aligns with this or that brand, and gives them the tools to reach out directly to that brand and solicit a sponsorship.

Athlane has also built out a Shop tool that lets streamers build out a no-code storefront for their fans, which they can link to on their Twitch, Twitter, Instagram, etc. This storefront can be a repository for all the products that streamer is endorsing, allowing fans to see products from multiple brands in a single place.

“We have a number of proprietary partnerships with data providers including companies like Twitter,” said cofounder Faisal Younus. “For example, we have a partnership with the leading manufacturer of apparel in eSports, which ties back into our system so we can look at how merchandise is moving.”

That data, when paired with the data provided when a streamer signs in and integrates with the platform, becomes very precise, according to the company.

“COVID-19 has brought on very rapid growth on the viewership side, and because of that we’ve seen an intense interest from a number of brands while conventional entertainment is shut down,” said Younus. “A lot of media spend is going to go unspent, but there is also a higher risk appetite for spending a little bit in esports, and our challenge is making sure this industry growth is sustained.”

He added that helping brands understand the true ROI of that spend will be key.