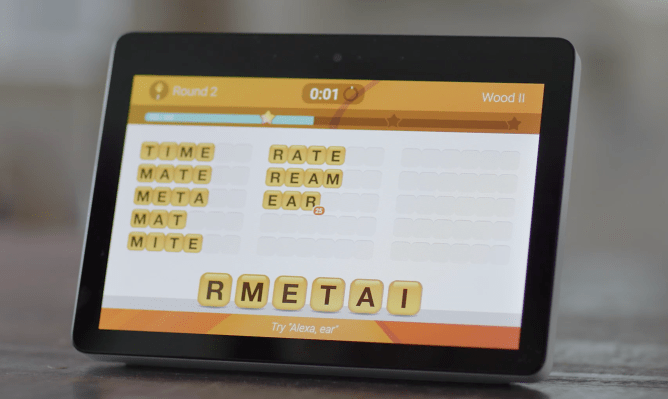 Zynga’s popular game, Words with Friends, is coming to Alexa. The new voice-powered game will be known as Word Pop, and — sorry — you can’t actually play it with friends right now, even though the game lives within Zynga’s broader Words with Friends franchise. Instead, the new Alexa voice game is viewed as a complement to Zynga’s multiplayer version. It’s a place where players can sharpen their word-building skills, no friends required.

In the game, Alexa will challenge the players to create as many words as possible from a six-letter bank, through a series of one-minute sessions. During this time, players must say or spell as many words as they can, while earning points for both the number and length of the words they find.

On Alexa devices with a screen, like the Echo Show, there will also be a visual component where players will see their letter banks and completed words. Arguably, the game is better this way as it allows you to view the letters and combinations much like you can on a mobile device or computer. Without the screen, the game will prove much more challenging — though that may appeal to some Words with Friends experts.

The companies characterize their teaming up on the new title as a “partnership,” where both Amazon and Zynga’s teams worked together to build the game. However, there isn’t currently a revenue-sharing situation, we understand, as the game is free and doesn’t offer in-app purchases. (Of course, if the title proves popular enough, the companies could likely revisit that decision.)

In the meantime, however, the companies see the opportunity to build their respective brands. Zynga can generate interest in its aging, cross-platform Words with Friends franchise by way of the new Alexa skill, while Amazon gets to introduce the idea of Alexa gaming to consumers via a well-known industry brand and popular game that users will already know how to play.

“I’m thrilled that by adding Word Pop to the Words With Friends family, players will be able to test and improve their word skills, making them even better Words With Friends players,” said Bernard Kim, president of Publishing at Zynga, in a statement. “The beauty of Words With Friends is that even after ten years, we’re still discovering new ways for the franchise to bring joy to players around the world. We’re dedicated to experimenting with services such as Alexa and game modes like Word Pop, which gives players a familiar, yet novel experience.”